The Allure of Crossover Games 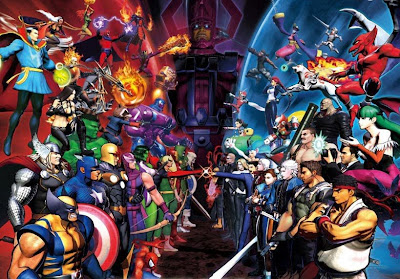 It's no secret that I love crossover games, from Capcom's "vs." series with Marvel, Tatsunoko, SNK, and Tekken to the plethora of platform fighting games like Super Smash Bros, PlayStation All-Stars Battle Royale, and Cartoon Network Punch Time Explosion. For years, crossover games have almost an unexplainable appeal. There's certainly a nostalgic value of seeing characters from different series finally meet up, whether for combat, kart racing, or playing sports. But more interestingly, it's the crossover of game mechanics that attracts me. It took me a long time to come to the realization that the allure of crossover games for me is actually the asymmetry of mechanics on the componential level.

The crossover game itself sets a foundation of universal mechanics, but each individual character brings with them unique mechanics from their own titles. More so than other games that include multiple playable characters, the variability of mechanics found in crossover games is incredibly high. It seems that the characters all came from different games, but that's because they did come from different games.

Let's look at the Super Smash Bros. series, as it's one of the most prolific crossover games. The series allows for a huge range of variability and asymmetry since many of the characters carry over mechanics faithfully. Perhaps the best example of this is Kirby, who has the ability to suck other characters and steal their main abilities. His movement is also extremely faithful to his games, as he floats around up to six times by sucking in air. Yoshi is another faithful character, carrying over his abilities from the Yoshi's Island series from his fluttering double jump and butt stomp to his egg throwing and his ability to turn enemies into eggs by eating them. Princess Peach has her floaty jump and her turnip throwing from Super Mario Bros 2 where she was first playable. Captain Olimar can summon, command, and throw different colored Pikmin, each with their own special effects. Link has his signature spin attack and uses his most famous weapons in his special moves, Princess Zelda has the ability to transform into the ninja Sheik, and Pokémon Trainer switches between multiple monsters.

Designing for a crossover game can be quite different from designing a game from the ground up. When you build a game from scratch, it's important to introduce unique mechanics to the game to make it stand out from the rest. Then as you introduce new characters and components to the game, the components generally follow the universal mechanics set out from the holistic design. In a crossover game, however, even though there are still universal mechanics, each component carries with them external mechanics from their original game. This creates a really interesting ecosystem where completely different mechanics are interacting and co-existing with each other.

This system inherently emerges from crossover games due to its nature of combining characters from multiple series into one. But there are certainly non-crossover games that achieve the same kind of ecosystem, implementing completely unique mechanics per component. Arc System Work's library of fighting games, including Guilty Gear, BlazBlue, and Persona 4 Arena, is a great example. Although none of them are crossover games in the real sense, the team definitely follows that design philosophy. Using BlazBlue for example, Ragna can steal the opponent's health, Jin freezes with the power of ice, Rachel controls the wind, Carl can simultaneously control a puppet, Hakumen's meter is based on time rather than actions, Tsubaki can charge up for more powerful attacks, and so on. The game brings these unique mechanics upfront by assigning one of the buttons, the Drive button, purely to each character's special ability.

The entire MOBA genre, or Action RTS as I prefer to call them, is also built on this premise. Dota, the game that sparked the entire genre, specially follows the crossover design sensibilities. For example, Lone Druid is the only hero with a pet bear, whom he can buy items for and equip with. Huskar gets stronger as he get closer to death, Rubick can steal spells from other heroes, Meepo splits himself into duplicates, and Invoker has a massive array of spells that he invokes using combinations of his three elemental orbs.

I've always been a fan of crossover games of all genres as well as fighting games and Action RTS's. And I've come to realize that all these games actually share common design sensibilities. Asymmetrical components and large range of variability between characters are the ultimate appeal of these games.
Posted by KingOfStreetFighters at 8:09 PM No comments:

The Inside Social Apps is a full-day conference that was recently held in New York. There were 8 sessions total -- 6 of which were panels, one was a fire-side chat with Facebook’s David Fischer, and one was an analytic report about mobile apps. These are the key takeaways from the conference.

Facebook, iOS, Android: Which Platform(s) Hold the Most Opportunity in 2013?
Social and Mobile Game Product Design and Development
The Future of Mobile App Discovery & Marketing

What I Love About My Company

The game company that I work for intends to update their employee handbook; transform it from a dreadfully dry read to something fun and engaging for our new employees and perspective candidates. A couple of us gathered and discussed what exactly we liked about our company that we should include in the handbook. Coming out of that meeting, I felt quite privileged to be working for a game company that has a great work-life balance and opportunities for growth. It's been in my mind all day and I wanted to write out my personal reasons why I like the company. Hopefully, more game companies out there are listening and taking notes. We need less EA spouses and Zynga horror stories.

I can sum up my favorite things about the company with three keywords. They just all happen to start with the letter E.

1. Education
2. Expression
3. Environment
Posted by KingOfStreetFighters at 2:44 PM No comments:

Stone Librande, the lead designer on the new SimCity, gave a lecture about the autonomous agent system that the game is based on.

Question and Answer
Posted by KingOfStreetFighters at 1:30 PM No comments:

Christina Norman, lead creative director at Riot Games, talked about the current problems of the League of Legends IP and how the company is taking measures to fix them.

Question and Answer
Posted by KingOfStreetFighters at 1:47 AM No comments:

Dan Cook, founder of Spry Fox and creator Triple Town and Panda Poet, gave a talk about efficiently generating value for players with the least amount of development time.

Question and Answer
Posted by KingOfStreetFighters at 7:51 PM No comments: