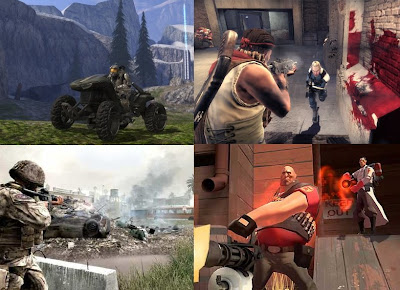 Have you ever felt intimidated by a multi-player game? I certainly have on many occasions. I rarely buy games at launch so I enter competitive scenes weeks after they've developed and matured. Upon entering a multi-player session in Gears of War, Halo 3, or more recently, Team Fortress 2, I just get killed repeatedly. Everyone is on a level much higher than I am to the point that I'm unable to compete. It certainly isn't fun playing the role of the punching bag, so I lose interest in the multi-player and eventually stop playing the game.

While I used to play Unreal Tournament, Counter-Strike, and Team Fortress Classic on a competitive level, I simply don't have the time anymore to invest and practice these new shooters. It's also incredibly difficult to learn the game when you're getting killed every thirty seconds. The only reasonable way to learn is to play private games with friends, but what if your friends aren't too interested in the game or you can't schedule ample time to play together? It's increasingly hard to enter competitive scenes, especially if you start late in their life cycles, but it doesn't have to be that way. There are a number of solutions to avoid this problem, to provide newcomers with a safe environment to learn (isn't that what games are supposed to be?) and give them a fighting chance against the expert players.

1) Better matchmaking system
The most obvious solution is a matchmaking system. Game designers can't expect players to match themselves. Ever tried creating a game called "Noobs only" and two minutes into the game, finding out that you're the only beginner there? There's a lot of advanced players who just love preying on the weak. A good matchmaking system should keep rankings and match players with similar skill levels.

2) Bots
One of the reasons why I was able to get into UT and CS was because I had bots. I played against easy bots to learn the controls, the weapons, and the maps. When I got that down, I ramped up the difficulty to learn the nuances of each and pick up tactics to use in certain situations. When I was able to dominate against the bots on the hardest difficulty, I was confident enough to play online against real players and I was actually able to hold my own against high level players. Of course, I still get killed since real people play a lot different than the computer, but it wasn't embarrassingly bad to the point of turning me off and causing me to quit the game. Bots gave me a safe environment to learn the game, to experiment without the pressure of winning or having someone kill me immediately.

Some may argue that you can learn the game by playing the single player campaign, but that only gives you a partial understanding of the multi-player. You may get the controls and weapons down, but the maps and tactics are a completely different beast. In campaign mode, your enemies often play more defensively, controlling a point and preventing you from reaching the end of the stage. In multi-player, however, your enemies are out to kill you, rampaging on an offensive frenzy or camping in esoteric locations. The gameplay and strategies are a lot different, so at least bots can give you a much better understanding of the competitive game than the single player mode.

3) Slight advantages
Complete domination isn't really fun. The most exciting matches are the close matches, so why not give the losing players or the lower ranked players a slight advantage, sort of like rubberband A.I. in racing games? Give them more health, or more ammunition, or a better starting weapon. Since beginners are unfamiliar with the maps and therefore, unfamiliar with the locations of weapon spawn points, allowing them to start with better weapons seems like a great compromise.

I'm surprised that Call of Duty 4 took the opposite route, implementing a leveling-up system where the advantages are given to the advanced players. This only widens the gap between the experts and the newcomers, and makes it that much more intimidating to enter the game. But it still manages to be the most played game on X-Box Live, so what do I know?

4) Tutorials and Feedback
One great way to learn the game is to have your expert friend teach you how to play and critique you as you're playing, but not everyone is lucky enough to have a friend like that. It would be great if the game developers served this role. Developers should release free tutorial videos, whether on their website or through the console's online service (XBL or PSN), that present useful strategies on different levels of play. David Sirlin did this for Super Street Fighter 2 Turbo that shipped with Capcom Classics Collection Volume 2, and they were well-done and appreciated.

The game itself can also give you advice or feedback on your gameplay, preferably after you get killed and you're waiting to respawn. Something to the effect of "Your aim was slightly off to the left" or "Try shooting in short bursts rather than spraying" would really help a beginner improve. This is similar to the feedback that Wii Baseball gives you about your batting, telling you if you're swinging too early or too late.

I'm sure implementing these features are going to be tough. It going to take time and money, but in the end, it's worth it. By making your game less intimating, it's more accessible to newcomers, which means more people would give it a chance and more people would buy the game. I personally haven't gotten Call of Duty 4 yet because of its intimidation factor, though I'd eventually pick it up to play its supposedly awesome campaign. The multi-player still scares me.
Posted by KingOfStreetFighters at 10:31 AM No comments:

Beyond the Television Screen

I just wanted to share a story of a neat game I played a year and a half ago.

On September 23, 2006, my friends and I attended a gaming event called the Manhattan Story Mashup held by Nokia, the mobile phone company. Over 250 participants showed up, each given a Nokia N80 cellphone a few days in advance. The cellphones came with a pre-installed game that was to be used at the event. The setup of the game is quite complicated so let me try to explain.

People would write short stories and submit them to the website. The nouns from the stories were selected to be "target words" for the players at the event. Each player would receive a random target word on their cellphone at regular intervals. They would then need to run around New York City, using the same cellphone to take pictures that would accurately convey the target word to another person. The pictures in turn are sent to two other random players and the two players must race against each other to guess the word that the picture represented in multiple choice fashion. Guessing the correct word would earn the player points, and likewise, the player who took the picture would receive points for being a good photographer. Were you able to catch all that? No? Well, I made a diagram to help you better understand. 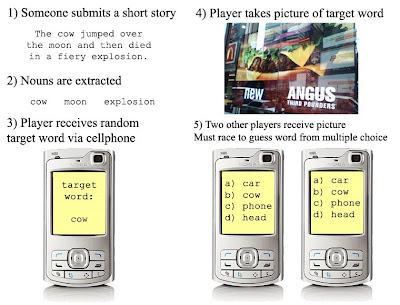 At the very start of the game, my friend Gary and I headed downtown from to . We both knew that would be the perfect place for picture taking, since the area is littered with commercial images and hundreds of people in motion. Our strategy paid off since we found a nice spot in front of the police station, where we took thirty to forty pictures that other people were able to match with the correct target words. By the end of the game, we finished with 412 points (which coincidentally, is my favorite 3-digit number), placing us in first place in the competition.

Many of the participants, including Gary and me, were really doubtful of the game before it began. It sounded like a cheap marketing gimmick and required too much investment. But we grew to love it as we played and coming out as the champions wasn't too bad either. The Story Mashup was a fun experiment to turn a video game into a social event, to take it beyond the television screen. With the Nintendo DS having Wifi and iPhones becoming a viable gaming platform, I would love to see a game of this caliber developed for those systems. This is all just wishful thinking...
Posted by KingOfStreetFighters at 10:09 AM No comments:

For Fans of Détournement 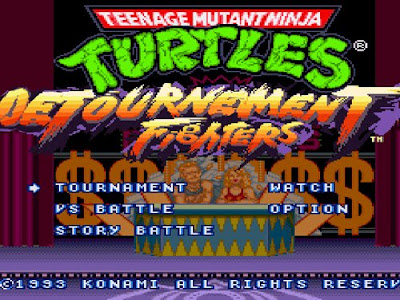 "Détournement" is short for "Deadly Tournament." The letter 'e' also replaces the letter 'a' for a reason which nobody can explain.

Détournements occur frequently and many video games have been made concerning this subject. 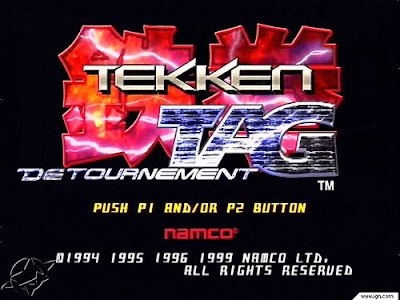 Often in these deadly tournaments, fighters will engage in a battle in which THERE CAN BE NO WINNERS! 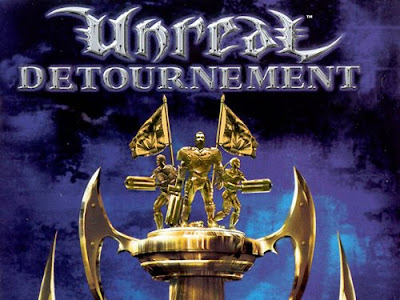 In "A User's Guide to Détournement," Guy Debord writes, "détournement is less effective the more it approaches a rational reply."

What he means is that these tournaments are always more KICKASS when it involves irrational, brainless killing. Hence, "Unreal Détournement" is a very popular example.
Posted by KingOfStreetFighters at 1:24 AM 1 comment: